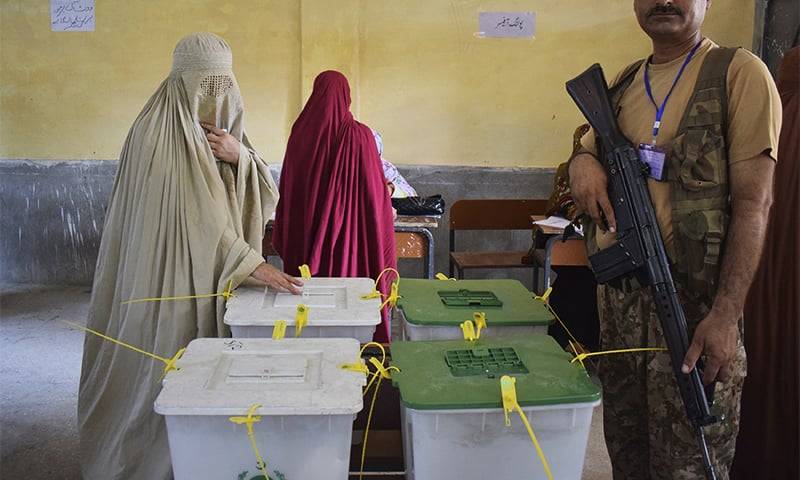 “My vote registration cannot make any difference,” believed a 30-year-old woman Musarat from district Shangla. “I know my boundaries, and those do not allow me to cast vote”.

Musarat waited for a 12-year-long period to apply for a Computerized National Identity Card (CNIC) as it is considered [in her patriarchal family]  of no use for women. According to the rules of the National Database & Registration Authority (NADRA), any citizen reaching 18 years of age can apply for CNIC.

Musarat, a resident of Kabulgram [a small village in Shangla], is now applying for CNIC. “I want to have CNIC so I can get enrolled on Ehsaas Emergency Cash Program”. She added. “Since our males do not allow us to exercise the right to vote, I do not have any interest in registering my vote”, she explained.

She further added that domestic violence is even not considered a crime, let alone talk about women getting out of their homes to cast vote in any polls. “I am not the only one, but almost every woman [in the village], unlike males, does not take any interest in the polls because many do not have their CNICs,” she mentioned.

On the question of zero interest in vote process, Maria, a 35-year-old woman from the same village, stated by agreeing to the reason of Musarat, “Alongside all the societal hurdles, the second biggest problem is of too far away polling stations which makes it impossible for us to convince our males.”

These are some of the key reasons for less number of female voters registered with ECP. According to data retrieved from the ECP website, there are 203,560 female voters out of a total of 447,436 voters. The variation between male and female voters is 40,316.

Referring to constitutional rights, the Head of the Department of Political Science at the University of Peshawar Shahida Aman explained that although Article 106(2) of the Constitution of Pakistan guarantees the right to vote to every citizen above the age of 18, there is a need to create awareness among women as well as men about the usefulness and importance of women in the electoral process, and the Election Commission of Pakistan (ECP), in this regard, has the key role to inform the voters of their concerned polling stations while separate and nearest to homes polling stations must be established in order to bring the issue to a conclusion.

“Under the Election Act 2017, the ECP holds the power to annul any election where participation or turnout of women voters is 10 per cent less than the total polled votes which is certainly a big and welcome step for women’s participation in elections,” added Shahida Aman.

Apart from this, the voter registration procedure has now been made completely easy whereby you can register your vote at the same time as you apply to NADRA for a Computerized National Identity Card (CNIC). You can also specify whether you want to vote at your “current” address or “permanent” address.

According to the Census 2017, the population of Pakistan has 207.9 million whereas the number of registered voters with ECP is almost 124 million which is half of the total population. The total population consists of 106.3 million men and 101.3 million women; however, male voters are 68,029,866 in number and female voters 56,723,479. The male voters are 55% and female voters are 45%. According to NADRA Chairman Tariq Malik, 10 million women had been added to the electoral rolls since the 2018 general election taking the total number of female registered voters to around 56 million.

Tariq Malik stated that the overall gender gap in the country has now reduced to 8.9 per cent, and NADRA is further focusing on the districts of Khyber Pakhtunkhwa and Baluchistan where the gender gap is more than 10 per cent. An important means of reducing this gap is to appoint women as in-charges in NADRA offices, ninety-six per cent of NADRA offices in the country are staffed by women, he added.

An Election Commission official said on condition of anonymity that this door-to-door registration is not that easy as there are many structural issues, which need to be addressed. “Mostly in areas such areas where people graze sheep or cattle or live in very remote areas, women are not registered, nor do they have to buy or sell”, the source added.

According to an ECP source, “women of such districts do not look for education as well as jobs, therefore, they don’t need a national identity card, and as a result, they cannot register as a voter”. “Government, ECP and NGOs want and try to get every citizen registered, but without their will to get registered, it is not possible,” the source grieved.

Provincial Election Commissioner Shamshad Khan said that ECP is committed to making efforts to register more female voters to reduce the gender difference in the number of male and female voters in the province particularly. With regards to Shangla, the district election commissioner has been asked to urge people to contact his office or AROs’ offices for registration and transfer of their vote, he informed.