SHARJAH – His Highness Sheikh Dr Sultan bin Mohammed AlQasimi, Member of the Supreme Council Ruler of Sharjah, and Supreme President of the Arabic Language Academy in Sharjah, emphasised that the true value of the award-winning works at the 5th edition of the ALECSO-Sharjah Award for Language and Lexical Studies lies in the fact that it provides exclusive study materials to the Arab library, which is already a renowned knowledge powerhouse housing strong research.

He said the true value of the award-winning works at the fifth edition of the Award lies in the fact that it provides exclusive study materials to the Arab library, which is already a renowned knowledge powerhouse housing strong research.

Attending the awarding ceremony held on Sunday at Dr Sultan Al Qasimi Centre, Sheikh Sultan said: “The award is not for specialisations that delve into politics or industry, but rather for scientific and literary research expanding the existing body of knowledge for researchers, and is not widely available in manuscripts or books that are hard to access.”

He added: “The importance of these research efforts cannot be understated as they serve to preserve and revitalise linguistic traditions, adding new dimensions to our understanding of culture. Universities and libraries play a vital role in this work, making it a key part of their mission. Language serves as the foundation of our identity, shaping our religion and beliefs, and thus, these research efforts should not be viewed as a cultural luxury, but as a fundamental aspect of our lives.”

Sheikh Sultan continued: “We hope that these studies will act as a comprehensive resource for anyone who wants to conduct research and wishes to contribute new information to the field of language. While the monetary prizes offered may be symbolic, the appreciation, and high status we offer to those who have participated in this study must not be underestimated. We extend our sincere wishes for success to all those who have contributed and encourage those who follow in their footsteps to pursue endeavours that benefit the public.”

His Highness honoured the winners of the 5th edition of the award and congratulated them for their outstanding achievement, praising their efforts in providing great services to the Arabic language. 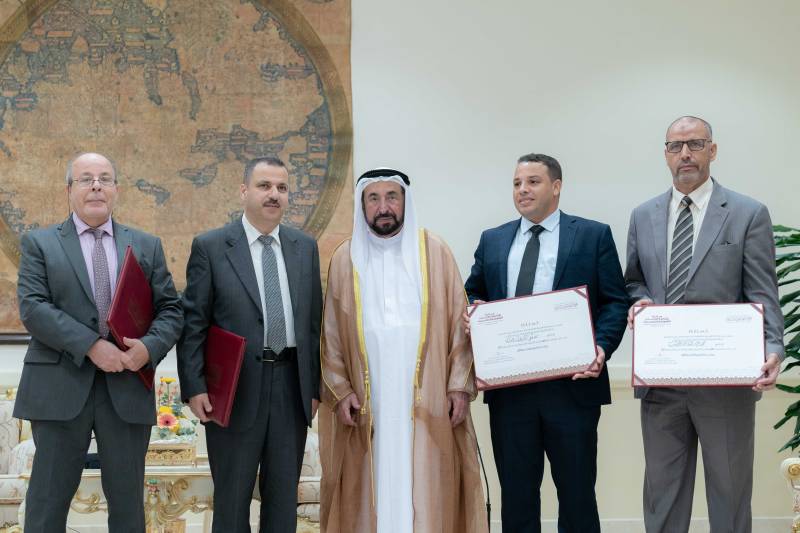 Dr Muhammad Abdel-Fattah Al-Khatib was announced the winner of the ‘Stylistic Studies in the Analysis of the Qur’anic Discourse’, in the Linguistics branch, while second place went to Dr Mustafa Al Jilani Rajwan.

Dr. Ahmed Al Dubaib, Member of the Board of Trustees of the Arabic Language Academy and member of the award’s jury committee, praised His Highness for the success of the 5th edition, citing the Sharjah Ruler’s continuous support for the Arabic language as a reflection of his belief in preserving the language of the Holy Quran and cultural initiatives that have bolstered Sharjah’s status as a hub for researchers, scholars, and enthusiasts of the Arabic language.

He highlighted the prestigious nature of the award, noting its consistent excellence and widespread recognition among Arabic language researchers and scholars in the Arab world. He added that the award’s reputation for fairness and impartiality is reflected as the number of applicants grows with each successive edition.

In his keynote speech, Dr Mohammed Safi Al Mosteghanemi, Secretary-General of the Arabic Language Academy, announced that His Highness the Ruler of Sharjah approved the topics of the sixth edition of the award — ‘Studies on learning the Arabic language and teaching it to its speakers and non-speakers for the linguistics branch and ‘The industry of Linguistic Lexicon: Study and Composition’ for the lexicographical branch.

He thanked the Ruler of Sharjah for the continuous support and efforts to preserve the Arabic language and enhance its scientific, literary and linguistic presence. He also lauded the efforts undertaken by teams and jurors of the 5th edition.

At the ceremony, His Highness also received a briefing on the operations of the jury committee and the challenges they encountered, along with several recommendations to increase the number of award submissions and improve the tools available to Arabic language intellectuals and specialists to participate in the award. The winners also presented their research to attendees and shared insights on the efforts they made to complete their projects.