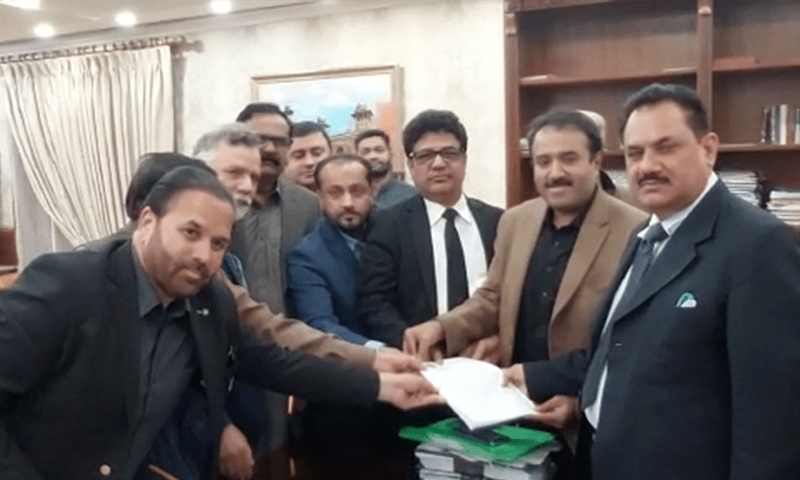 Days before the PTI’s planned dissolution of provincial assemblies in Punjab and Khyber Pakhtunkhwa, a delegation of PPP and PML-N lawmakers submitted on Monday night a no-confidence motion against Chief Minister Pervaiz Elahi in the Punjab Assembly (PA).

The document submitted by the opposition, a copy of which is available with Dawn.com, stated that “members of the PPP and the PML-N of the provincial assembly have lost confidence in CM Pervaiz Elahi’s ability to lead the house as per the Constitution”.

It added that Elahi had “massacred democratic traditions” and thus he had lost the confidence of the majority of members of the house.

The no-trust move was moved under “Article 136 of the Constitution read with Rule 23 of the Rules of Procedure Provincial Assembly of Punjab (PAP), 1997”.

A resolution referred to in clause (1) shall not be voted upon before the expiration of three days, or later than seven days, from the day on which such resolution is moved in the Provincial Assembly.

If the resolution referred to in clause (1) is passed by a majority of the total membership of the Provincial Assembly, the Chief Minister shall cease to hold office.

Separately, a no-trust motion has also been submitted against PA Speaker Sibtain Khan under Article 53 of the Constitution.

PML-N’s Nazir, in an interview with ARY News after the submission, said the no-confidence motion was submitted against the chief minister, PA speaker, and deputy speaker.

He said there were signatures of “around 150 members” and there were more members coming from outside Lahore.

Meanwhile, Interior Minister Rana Sanaullah, in an interview with journalist Shahzeb Khanzada on Geo News, said that if a chief minister wanted to dissolve an assembly then it was necessary for him to have its confidence.

“That is why […] today, the Punjab governor sent a piece of advice to the chief minister to take a confidence vote before dissolving the assembly […], and then the no-confidence motion was submitted.

Hence, the chief minister can’t dissolve the assembly without taking a vote of no-confidence,“ the interior minister added.

Immediately after the resolution was submitted, Punjab Governor Baligh ur Rehman directed Elahi to seek a vote of confidence from the assembly on December 21.

In an order, shared by the PML-N on Twitter, the governor said that the chief minister has “lost the confidence of his party president Chaudhry Shujaat Hussain and members of his own party belonging to the PML-Q”.

“It is widely known that over the last few weeks serious differences of opinion erupted between two coalition parties of the ruling alliance in the Punjab Assembly i.e. PTI and PML-Q regarding political strategies, dissolution of the assembly, development schemes, and transfers of public officials,” it stated.

The order highlighted that the aforementioned differences became evident after the appointment of a PTI member — namely Khayal Ahmed — to the provincial assembly without the knowledge of PTI Chairman Imran Khan.

It added that the most recent evidence of “cracks between the ruling alliance” was the resignation of a cabinet member after he engaged in a “verbal spat” with Elahi.

“The chief minister has stated in a TV programme on Dec 4 that he is not going to dissolve the provincial assembly until March 2023, a position which is completely at odds with the PTI’s public opinion on the issue.”

Citing these facts, Governor Rehman said that Elahi “does not command the confidence” of the PA and subsequently summoned a session on Dec 21 at 4pm under Section 130(7) of the Constitution for the no-trust vote against Elahi.

‘An escape from elections’

Responding to the development, PTI leader Fawad Chaudhry said that the purpose of the no-confidence motion was to “escape from elections”.

“We won’t allow [them to run]. The no-confidence motion will fail and Parvez Elahi will dissolve the assembly. The people’s decision is final,” he said.

PTI leader Babar Awan said that if the government alliance had a majority then Hamza Shehbaz would not have lost the chief minister’s election.

“The mafia will get nothing but regret and defeat due to the no-confidence [motion] in Punjab this time as well. The PDM alliance can do nothing but cry to run away from the election,” he tweeted.

A way out of ‘quagmire’ caused by PTI

The decision to submit the no-confidence motion against Elahi today comes as the government scrambles to find a way out of the ‘quagmire’ caused by PTI. Last week, Imran announced that the assemblies of Khyber Pakhtunkhwa and Punjab — where the PTI is in power — would be dissolved on Dec 23.

On Sunday, Prime Minister Shehbaz Sharif visited PML-Q President Chaudhry Shujaat and reportedly discussed with him the option of re-launching efforts to woo back Elahi by offering him to continue as CM with the help of PML-N and PPP’s support after ditching PTI, Elahi’s partner in the coalition ruling Punjab.

In case the ‘carrot’ policy failed, then Shujaat should use his influence on his party’s (PML-Q) 10 MPAs to bar them from voting for Elahi if and when the governor asks him to take a vote of confidence, sources privy to the development told Dawn.

Later, former president Asif Ali Zardari called on PM Shehbaz at the latter’s Model Town residence and discussed the outcome of his meeting with Shujaat.

Both sides also discussed various options available to them for preventing the Punjab Assembly’s dissolution. Zardari then left to meet the PML-Q president with some more options at his hand.

A senior PML-N leader told Dawn that Zardari carried a new option for Elahi — resign as chief minister to make ineffective and infructuous the signed summary he had handed over to Imran for the dissolution of the assembly.

This ‘surprise’ step would also ensure that the assembly would remain intact at least until a new chief minister is elected, he said, adding the coveted office may again be offered to Elahi or a person of his choice.

Responding to a question whether PML-N would prefer to move first a no-confidence motion against Elahi or tell the governor to ask the chief minister to take a vote of confidence in case the seasoned politician from Gujrat did not accept the ‘carrot’, he said both the options would be used simultaneously.

He explained that as in the case of a vote of confidence the Constitution does not explicitly bar a prime minister or chief minister from dissolving the house, they would also file a no-trust motion against the CM (as well as the speaker and deputy speaker) to strip him of the power of dissolving the assembly.