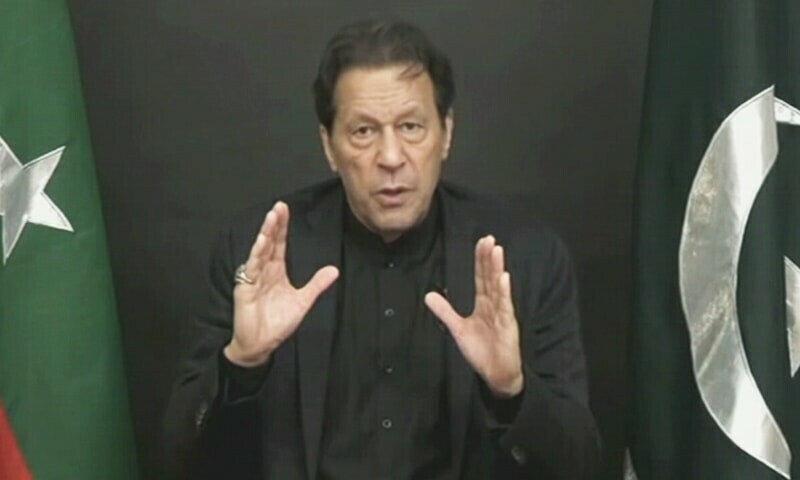 PTI Chairman Imran Khan on Thursday bemoaned the Pakistan Democratic Movement’s attempts to not let him exercise his “constitutional right” of dissolving provincial assemblies as he reiterated his demand for “free and fair elections”, which he said was the only way to drag the country out of the crisis.

Imran made the remarks as he addressed his party’s parliamentarians, supporters and workers who had gathered outside the Punjab Governor House in Lahore to “block” Balighur Rehman from taking any “unconstitutional” decision of de-notifying Chief Minister Chaudhry Parvez Elahi.

“Today I want to talk to the nation about the situation in Punjab,” he said. “There is a strange environment. Initially, the PML-N was challenging us to dissolve assemblies, saying that they were ready for elections. But when we did that, a vote of confidence and no-trust motions were moved in the Punjab Assembly.”

The PTI chief explained that he wanted to dissolve his provincial assembles “because we fear that if snap polls are not held, the country will slip out of our hands”.

Imran claimed that the reason behind “this joke in Punjab” was one: “They [the coalition government] is running away from elections. The convict sitting abroad and Zardari are scared.

“They have a one-point agenda to hide their theft and they will hurt the country in the process. They won’t think about Pakistan once. All they want is an NRO 2,” he alleged.

‘One man’s animosity against PTI’

The PTI chief said that “one man’s animosity” with his party eight months ago was why the country had plunged into a crisis.

He recalled that since his ouster, the PTI and its members have been oppressed only because of “one man”. “What was our fault? Only that we refused to accept the thieves you imposed on us?”

Initially, Imran pointed out, it was only the PTI. “But then the country decided to join us. This man saw that the nation was with us […].

“Never did the nation come out in huge numbers, that too again and again. It was giving one message that the imported government was unacceptable,” he said.

However, the ex-premier contended that “one man” was still apt at “destroying” his party and went to all extents. “When they saw that nothing was working out, they decided to kill me and remove me from the way.”

He then asked: “This one man, what more will you do to force us to accept the imported government?

“Videos and audios are being leaked on social media […] tell me, how low will we fall,” Imran asked, claiming that all of these things were being done to blackmail his party.

During his address, Imran also raised questions about the country’s foreign policy and criticised the government for the rising incidents of terror in Khyber Pakhtunkhwa.

He said that during the PTI tenure, Pakistan had the “best relations” with the interim Afghan government which helped “put a stop” to terrorism, recalling that the country had aided evacuations from the neighbouring country.

“But today, what is happening in Malakand and Bannu […] I want to ask where is our foreign policy,” Imran said, as he called for mending ties with Afghanistan.

He also decried the lack funds provided to KP, warning that if the money was not released, the situation in the province will “go out of our hands”.

‘Are institutions not worried?’

Concluding his address, Imran asked the institutions, “all those that have a stake in the country”, if they were not worried about where Pakistan was heading and its future.

“Are you not worried today that our country is heading towards a point where there will be no coming back,” he asked and then stressed that snap polls was the only solution.

“As soon as elections are held, we will get a chance to get out of this mess. Without political stability, there is no economic stability,” he added.

Earlier, PTI demonstrators congregated and chanted slogans against the governor, and also brought a 100-meter-long PTI flag to show their support for Imran.

PTI leaders Yasmin Rashid and Hammad Azhar also attended the protest. Ahead of the gathering, all the roads leading the Governor House were blocked.

In a tit-for-tat move on December 21, Governor Rehman termed the speaker’s ruling “unconstitutional” and the coalition government hinted at the imposition of the governor’s rule in Punjab.

As the constitutional crisis in the province unfolds, PTI leader Hammad Azhar on Wednesday said that former premier Imran Khan will announce the party’s “new plan of action today”.

“Imran has decided that we will collect a big crowd outside the Governor House to prevent them [the Pakistan Democratic Movement] from taking any unconstitutional steps,” he said.

Meanwhile, PTI leader Fawad Chaudhry claimed that the party’s women MPAs had told Imran that they were receiving offers from former president Asif Zardari to abstain from voting for Rs50 million each.

“The people of Sindh should know that Asif Zardari is spending their welfare money to buy loyalties of PTI MPAs,” he said.

On the other hand, the federal government has sought deployment of Rangers to beef up security of the Governor House “till further orders under sections 7(b) and 10 of the Pakistan Rangers Ordinance, 1959 and Section 4(3)(i) of Anti-Terrorism Act 1997”.

“The Pakistan Rangers (Punjab) is requested to immediate necessary action with regard to beefing up the security at the Governor’s House, Lahore, in coordination with the office of the governor,” said the Interior Ministry.