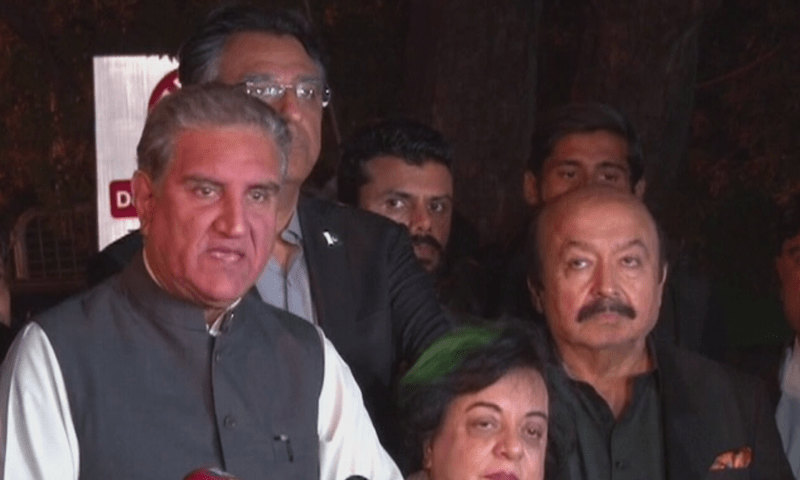 PTI leader Shah Mahmood Qureshi said on Wednesday that party chairman Imran Khan was determined to dissolve assemblies in Khyber Pakhtunkhwa and Punjab within the next few days.

“In a meeting with the party leadership today, Imran said that snap polls were the only way forward […] and for this, the dissolution of assemblies is very important,” the former minister told reporters in Lahore.

Last month, Imran announced that his party would disassociate itself from the “current corrupt political system” by quitting the assemblies of Khyber Pakhtunkhwa and Punjab.

However, in an interview with Bol News earlier this week, the PTI chief said that he may delay the dissolution of Punjab and KP assemblies if political players agreed to come to the table and decide that the general election would be called maximum by the end of next March.

Since March will be the month of Ramazan, Imran’s new suggestion implied that the coalition government should immediately announce the date of elections, and dissolve all assemblies.

While the former prime minister is determined to dissolve assemblies, Punjab Chief Minister Pervez Elahi — who is in power in the province due to the support of PTI — has said that the provincial assembly will “continue the same way for the next four months till March”.

“My stance is the same … I will dissolve [the assembly] whenever he (Imran) tells me to,” Elahi stated in an interview with Hum News. “That decision has been taken. However, now you’d have to think of its pros and cons. For that, we will have to hold talks.”

In a media talk today, Qureshi said that Imran had been holding back-to-back meetings with PTI lawmakers in Punjab.

“After talking to them, he is convinced that the only way forward is dissolving assemblies and moving towards fresh elections,” he stated.

“The party believes that even if the PDM (Pakistan Democratic Movement) keeps its own interests above the state’s interest […] and does not hold elections […] it is their wish.

“We want that before Ramazan, the election process should be completed and governments should be formed,” Qureshi said, adding that Imran was clear on his stance that there should be no delay in the dissolution of assemblies.

Stressing the need for fresh polls, he claimed that Pakistan’s economic situation was worsening day by day.

“The business community has lost trust [in the government]. Farmers are worried […] there is no investment coming in the country […] our growth rate is going down and same is the case with industrial productivity.”

Qureshi went on to say that the current situation “clearly hinted” at an economic decline.

The PTI leader also said that the party has welcomed the Supreme Court’s suo motu notice of the murder of journalist Arshad Sharif — who was shot dead in Kenya earlier this year.

After the top court took up the case yesterday, the Islamabad police had sprung into action and registered a first information report [FIR] of the murder.

Talking to the media today, Qureshi said: “We appreciate that the Chief Justice of Pakistan has formed a five-member bench. A fact-finding report has also been presented [in the court] and its salient features are in front of you.

“The point of view of Sharif’s mother is also in front of you. We believe that justice should be served,” he stated.

Meanwhile, PTI leader Fawad Chaudhry criticised the move to name the police as a complainant in the FIR. “We believe that the court and institutions have one job — to satisfy Sharif’s mother.”

‘Want to reduce differences with institutions’

“These are very serious matters on which our nation, civil society, judiciary, and all other stakeholders should think. If this continues, it will only harm the country.”

The PTI leader went on to say that his party supported democracy and always functioned constitutionally.

“We don’t want to harm any institution. If, in the past, there were some differences or misunderstandings […] we now want to build confidence to reduce these differences,” he added.