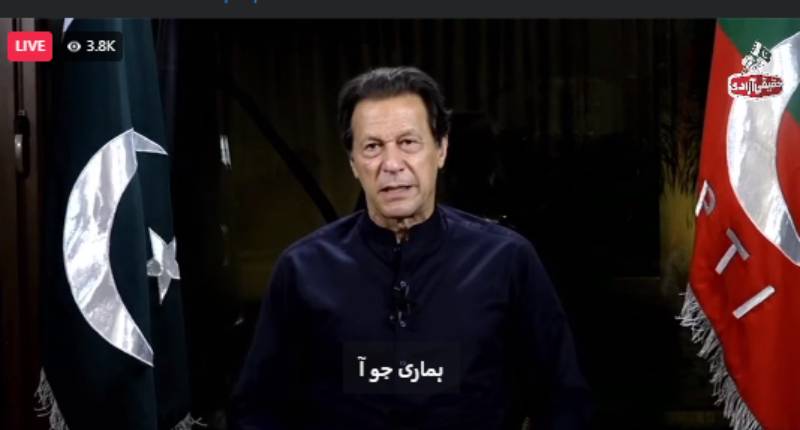 RAWAT – Pakistan Tehreek-e-Insaf (PTI) Chairman Imran Khan has appealed to his supporters to join him in Rawalpindi on November 26, vowing to present his next plan of action against the government then.

Stakes are high in the South Asian country as the ousted prime minister has given a call to the masses to gather in Rawalpindi — where the powerful Pakistan military is headquartered.

PTI’s “Haqeeqi Azadi Long March” will have a touchdown in the twin cities at a time when the coalition government led by PM Shehbaz Sharif is due to announce the next army chief.

Addressing the long march at Rawat via video link on Saturday, Khan asked everyone to reach Rawalpindi on November 26 (Saturday).

Khan’s march came to an abrupt halt on November 3 when he and 11 others were injured in a gun attack in Wazirabad city. The march resumed last Thursday without Khan, who is recovering from gunshot wounds in Lahore.

“You all have to reach Rawalpindi on November 26 between 1pm to 2pm,” he said, addressing his supporters who were gathered in Rawat—a town on the outskirts of Islamabad—through a video link from his Lahore residence.

“I’ll meet you there,” he assured supporters. “I’ll be giving you the next plan of action there.”

Khan reiterated his demand for free and fair elections to pull Pakistan out of its current economic and political turmoil, saying that the government has “no roadmap” to solve people’s problems.

“We’ll demand one thing and that is free and fair elections,” he said, promising that his movement will continue till “genuine freedom” is not achieved.

Khan insisted he isn’t leading the anti-government movement for political gain. Rather, he said, it is his mission to ensure rule of law in Pakistan and bring the powerful to account. “Everyone knows my life is under threat,” he said. “But I know death is better than slavery.”

“We want a sovereign country where the nation makes its own decisions independently,” Khan said. He questioned the role of the powerful military establishment for allegedly imposing a government of what he called a “cabal of crooks.”

“I want to ask the establishment, what happened during the three-and-a-half years of my rule that they [the rulers] became eligible to be imposed on us,” he asked. Khan said the Sharifs and Zardaris, Pakistan’s two prominent political families, were removed from power by the military in the ’90s on allegations of corruption.

“Tell me of a single benefit that they have brought to Pakistan in the last seven months,” he said, adding that all economic indicators, including industrial and agricultural growth, were positive during his tenure.

Khan urged all Pakistanis to be part of his anti-government protest march to bring about real change in the country through a peaceful struggle. “You can’t be neutral,” he told supporters. “Your future generations will repent if you become neutral now.”

The former ruling party has also approached the capital administration, seeking their permission to hold a rally in the federal capital as convoys led by PTI Vice Chairman Shah Mahmood Qureshi and General Secretary Asad Umar reach near the twin cities.

Earlier today, former information minister and PTI leader Fawad Chaudhry said the second phase of the PTI’s long march will enter Rawalpindi from Rawat today. He said the final stage has arrived, urging activists to be ready for the anti-government march.