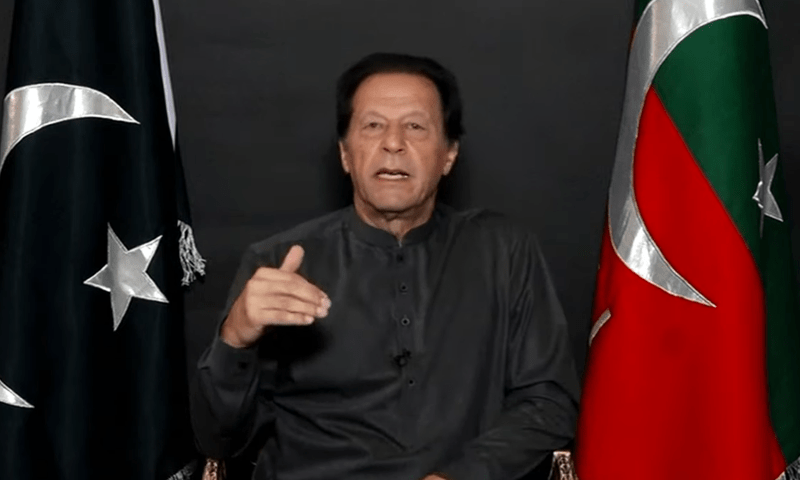 PTI Chairman Imran Khan is currently addressing his party’s parliamentarians, supporters and workers who have gathered outside the Punjab Governor House in Lahore evening to “block” Balighur Rehman from taking any “unconstitutional” decision of de-notifying Chief Minister Chaudhry Parvez Elahi.

After congregating at the site, the demonstrators chanted slogans against the governor, and also brought a 100-meter-long PTI flag to show their support for party chairman Imran Khan — who is addressing the gathering via video link.

PTI leaders Yasmin Rashid and Hammad Azhar have also arrived at the protest.

Ahead of the gathering, all the roads leading the Governor House were blocked.

In a tit-for-tat move on December 21, Governor Rehman termed the speaker’s ruling “unconstitutional” and the coalition government hinted at the imposition of the governor’s rule in Punjab.

As the constitutional crisis in the province unfolds, PTI leader Hammad Azhar on Wednesday said that former premier Imran Khan will announce the party’s “new plan of action today”.

“Imran has decided that we will collect a big crowd outside the Governor House to prevent them [the Pakistan Democratic Movement] from taking any unconstitutional steps,” he said.

Meanwhile, PTI leader Fawad Chaudhry claimed that the party’s women MPAs had told Imran that they were receiving offers from former president Asif Zardari to abstain from voting for Rs50 million each.

“The people of Sindh should know that Asif Zardari is spending their welfare money to buy loyalties of PTI MPAs,” he said.

On the other hand, the federal government has sought deployment of Rangers to beef up security of the Governor House “till further orders under sections 7(b) and 10 of the Pakistan Rangers Ordinance, 1959 and Section 4(3)(i) of Anti-Terrorism Act 1997”.

“The Pakistan Rangers (Punjab) is requested to immediate necessary action with regard to beefing up the security at the Governor’s House, Lahore, in coordination with the office of the governor,” said the Interior Ministry.