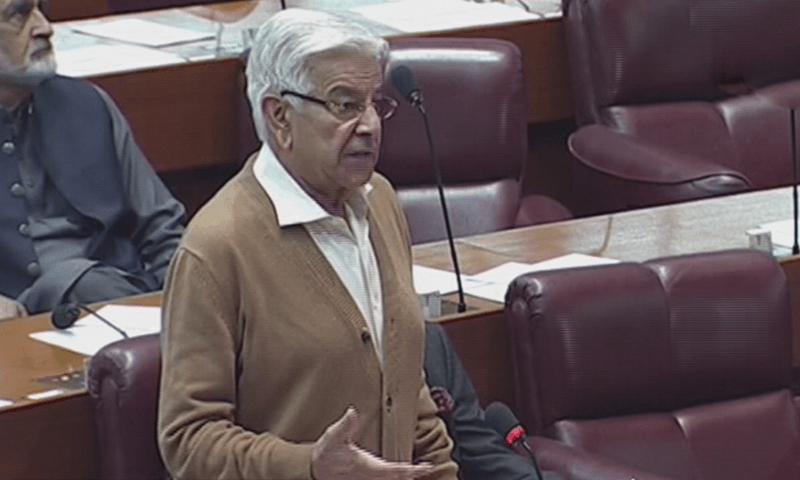 Defence Minister Khawaja Asif announced on Monday that the process of making appointments to the top slots of the Pakistan Army had begun and the General Headquarters (GHQ) Rawalpindi had already been informed about it.

Speaking in a session of the National Assembly, Asif said his ministry has received the prime minister’s letter about initiating the process for the next army chief’s appointment.

Furthermore, he said that the letter was communicated to the GHQ as well.

Asif said there was a state of “unrest” now that the process for the appointment was initiated.

The defence minister criticised the media for contributing to the charged atmosphere by airing news about whether the summary of the army chief candidates was sent or not but not bothering to verify the information.

Asif said the process was being treated as if it was the only issue in the country today and nothing else.

“This distress is at a time when our economy is weak and we can’t stand on our feet. Hopefully, our effort is that this process passes so we can go towards stability,” he said, hoping that this threshold of the appointment would be crossed in the next two to three days.

Earlier today, Asif tweeted that the army chief’s appointment process would be completed soon in line with all constitutional requirements.

Separately, in an informal talk with reporters in Islamabad, Asif ruled out reports of a deadlock over the name of the new army chief.

“There is no deadlock. Once the summary is received, then a discussion will be held,” the senior PML-N leader said.

The defence minister said the prime minister would take the army leadership into confidence, following which a decision would be taken. “Currently, there are five to six senior-most candidates. But no decision has been taken as yet on the names.”

Asif said that consultations over the current state of affairs were taking place on a daily basis. “I had also informed the media earlier that the process [of appointments] would start on Monday,” he said.

He also went on to say that the government was not facing “any pressure” and was also not in any haste.

The minister said that a “dossier” and a summary would be sent to the Prime Minister House. “Subsequently, the prime minister will formalise everything and send it to the president.”

When asked to comment on when a formal decision could be expected, the minister responded: “Maybe by tomorrow or the day after.”

Chief of Army Staff Gen Qamar Javed Bajwa’s tenure is ending on Nov 29, but the appointment of new chief is likely to take place before Nov 27, the day when one of the candidates is going to retire.

A source in the Prime Minister’s Office told Dawn that the ministry of defence will initiate the summary for the appointment of new army chief before Nov 27.

A source in the defence ministry said it had been decided that the appointment will be made before Nov 27.

The source said that the government, its allies and the military establishment were on the same page on the issue as the consultation process among the three had been completed.

The role of President Dr Arif Alvi has come to the limelight in the appointment process as some media reports claimed that he could hold the notification for 25 days.

However, PM’s spokesman Fahd Hussain while talking to Dawn ruled out the possibility of any such action by the president.

He said under the Constitution the powers to appoint the new army chief rested with the prime minister and he would use his powers to select the best-suited person for the slot.

On Saturday, Foreign Minister Bilawal Bhutto-Zardari advised President Alvi against creating any “sort of disorder” in the army chief’s appointment.

“It is the last chance for the president and he would have to bear any consequence for any disorder. As long as Arif Alvi sahib’s role is concerned, his test has been taken before whether he will stay loyal to Pakistan, its Constitution, its nation and democracy or will he fulfil his friendship with [Imran] Khan sahib,” he added.

Separately, Special Assistant to PM on Law and Justice Irfan Qadir told Dawn President Alvi could not hold the summary as under Article 243 of the Constitution the appointment of chief of the army staff was solely a function of federal government and not the president.

“This article clarifies that command and control of the army rests with the federal government and it has further been defined in articles 90 and 91 of the Constitution,” he added.

“[The] president cannot delay the summary and has to sign it at once,” he added.