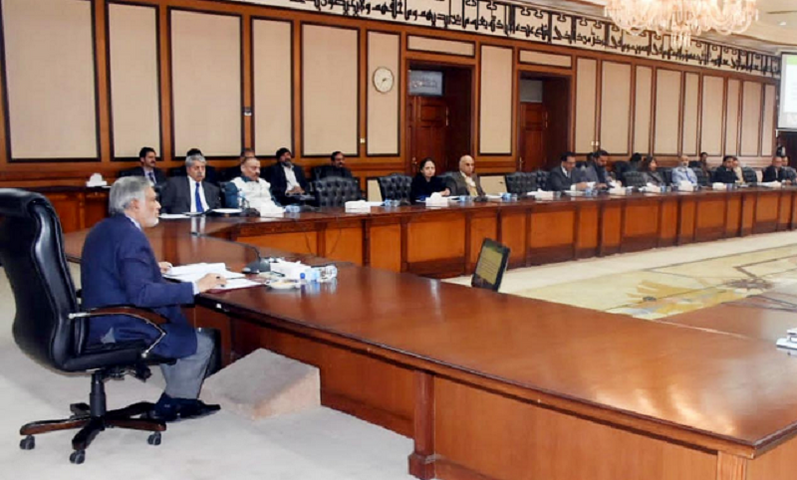 ISLAMABAD: The Economic Coordination Committee (ECC) of the Cabinet was informed on Wednesday that receivables of the national fuel supplier – Pakistan State Oil (PSO) had crossed Rs612 billion and it was struggling to manage remittances to its foreign suppliers.

The meeting of the ECC presided over by Finance Minister Ishaq Dar, however, did not immediately approve Rs17bn urgently demanded by the PSO to honour its liabilities to international firms, particularly its long-term fuel supplier Kuwait Petroleum Company (KPC).

The Petroleum Division reported that under a credit facility provided by KPC since 2000 and extended annually for the supply of diesel, a joint account of the federal government and KPC had been set up with the National Bank of Pakistan in which PSO keeps on depositing rupee equivalent funds after 30 days of the bill of lading for each shipment.

After 90 days from the bill of lading, the NBP has to transfer the cargo cost to KPC and exchange cover for an additional 60 days is borne by the federal government.

However, the account facility started to face huge shortfalls in April 2020 on account of exchange losses, posing a default situation in remittances to KPC.

At the time the ECC approved a supplementary grant of Rs12bn which helped PSO avoid an international default. The facility worked well for another two years but then suffered a shortfall again and now this shortfall stood at Rs17bn owing to “prevalent upheaval” in the rupee-dollar parity.

The Petroleum Division said the PSO had been defaulting even on rupee deposits in the NBP account because of its liquidity challenges as its receivables reached Rs612bn and “it urgently required adequate funds so that liabilities are met on time”.

The Petroleum Division and PSO have been trying to manage the situation for avoiding international default by depositing required funds on due dates but the situation was “too critical” now.

It also complained that the Petroleum Division had been submitting budget requirements for exchange loss on this facility every year but the Ministry of Finance did not make separate provisions which led to exposure to international default.

The finance ministry, however, argued that the government had already released Rs30bn to address PSO’s liquidity position under the foreign exchange head in September and arranged another Rs50bn through market financing. Also, the government was now trying to ensure PSO recoveries through power companies and gas companies.

The Petroleum Division, however, insisted that the matter related to actual foreign exchange loss of over Rs17bn so far on the KPC’s credit facility up to Dec 2, which has to be paid by the government sooner or later.

“PSO has made all outstanding payments delayed due to liquidity position. Exchange loss, however, is the liability of the government”, Petroleum Division was quoted but a decision was deferred.

The ECC approved a summary of the Ministry of Energy (Petroleum Division) on the transfer of 30pc working interests in exploration licences/block – Margala Block – owned by M/s MOL of Hungary to M/s Mari Petroleum Company Ltd.

It was apprised that Margala Block was governed by Pakistan Petroleum Exploration and Production Rules 2001 and the acquiring company MPCL was operating in Pakistan since 1954 and has working interests in 23 exploration licences and 15 development & production leases. The ECC was further informed that M/s MOL had cleared all its financial obligations.

The ECC also approved a Rs823m technical supplementary grant to the Ministry of Maritime Affairs, enabling Gwadar Port Authority (GPA) to disburse the amount of Rs250,000 per head to 3,291 fishermen registered with Balochistan Fisheries Department for the purchase of boat engines.