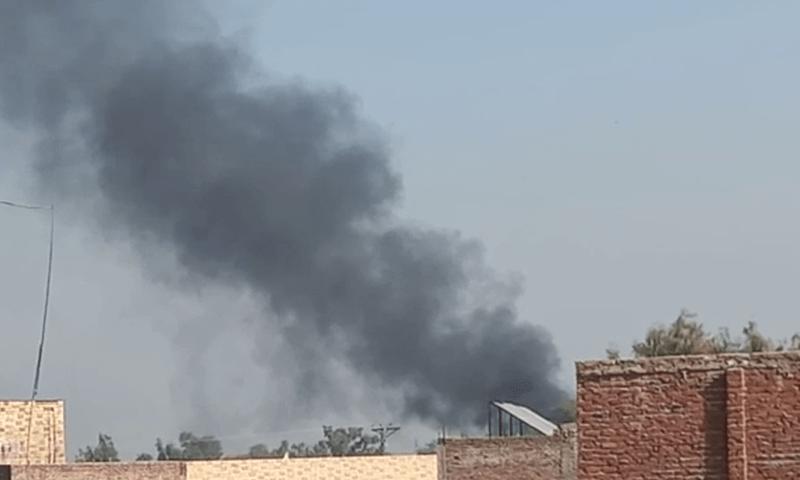 Late Sunday, the militants held in the CTD centre took control of the building and took a number of law enforcers hostage. They had demanded safe passage to Afghanistan.

Footage aired on TV on Tuesday showed plumes of smoke rising in the air from the CTD compound. Reuters reported locals as saying they heard explosions coming from the vicinity of the centre.

Dawn.com was able to confirm that an operation is currently under way.

The development comes amid a spate of terrorist attacks in Pakistan. Four policemen were martyred when terrorists attacked a police station in Lakki Marwat — a district of Bannu division — on Sunday.

On Monday, an Intelligence Bureau sub-inspector was gunned down in Peshawar, while a suicide attack in North Waziristan claimed the lives of a soldier and two civilians. In Balochistan, back-to-back bombings in Khuzdar injured 20 yesterday.

The attack on the compound has been claimed by the TTP as the banned outfit confirmed in a statement released on Monday that its members had taken several CTD and security personnel hostages.

The group’s spokesperson said that in an earlier video statement, the hostage takers had demanded a safe exit but mistakenly mentioned Afghanistan since they were not aware of ground realities.

The militants inside the seized CTD centre also released several videos on Monday, asking the people of Bannu, especially the ulema, to come forward and resolve the standoff between the militants and law enforcers through dialogue.

In a video clip, a detainee declared himself ‘innocent’ and said along with the Taliban militants and officials taken hostage by the militants, several innocents were also present inside the compound.

In the video, he said that the elders and the ulema of Bannu should intervene to avoid bloodshed and settle the standstill in a peaceful manner. “The people and army are ours and the Taliban wanted to go outside [the compound] to kill people, but we stopped them,” he added.

In another video clip, several armed militants could be seen roaming and taking positions inside the compound.

In a video released from CTD centre in Bannu, one of the individuals in the video has been identified as Commander Zarrar, who had been under custody. Zarrar had merged his group with TTP and it was still unclear what he was doing in the CTD centre even though he was in custody since January 2022.

This is a developing story that is being updated as the situation evolves. Initial reports in the media can sometimes be inaccurate. We will strive to ensure timeliness and accuracy by relying on credible sources, such as concerned, qualified authorities and our staff reporters.