The WTO ruled on Wednesday that the U.S. had violated international trading laws by requiring Hong Kong products to be labeled “Made in China,” rejecting Washington’s argument that its national security interests allowed for such labeling.

China welcomes the fair ruling by a WTO dispute panel, said Mao Ning, spokesperson for the Chinese Foreign Ministry, at a regular press briefing in Beijing.

Currently, the origin of Hong Kong export products is marked as “Hong Kong” as Hong Kong is a separate member of the WTO and enjoys the special status as a separate customs territory under “One Country, Two Systems.”

“The status of Hong Kong as a separate customs territory is approved by the Chinese government, confirmed by the Basic Law of the Hong Kong Special Administrative Region of the People’s Republic of China and established by the multilateral rules of the WTO,” said Mao. “It is not granted by any single [WTO] member.”

Earlier on Thursday, a China’s Ministry of Commerce spokesperson urged the U.S. to respect the ruling.

China hopes the U.S. will take concrete action to correct its wrongdoings and uphold the rules-based multilateral trading system and the normal trade order, the spokesperson said in a statement.

On August 11, 2020, Washington required Hong Kong products exported to the United States be labeled “Made in China.”

In Wednesday’s ruling, the WTO panel said the U.S. origin marking requirement had violated the country’s obligation under the trade body’s rules.

The panel said it did not constitute an “emergency in international relations” and that the U.S. labeling rules discriminated against products made in Hong Kong.

The HKSAR government also welcomed the ruling, saying it has once again proved that the United States had disregarded international trade rules.

Washington has attempted to “impose discriminatory and unfair requirements unilaterally, unreasonably suppressed Hong Kong products and enterprises, and politicized economic and trade issues,” said Algernon Yau, secretary for commerce and economic development of the HKSAR government, in a statement on Wednesday.

China, US should work together to address global challenges: Wang Yi

China and the United States should work together to deal with global challenges, State Councilor and Foreign Minister Wang Yi said on Thursday.

Wang made the appeal to Washington when he met in Beijing with John Thornton, global co-chair of the Asia Society, a New-York based non-government organization that promotes shared futures for Asia and the world across policy and others.

In the face of rising regional hotspot issues and global challenges, such as climate change and the food and energy crisis, China and the U.S., as two major responsible countries , should carry out necessary cooperation, the Chinese foreign minister said, adding that it is also the general expectation of the international community.

The Chinese side is open to dialogue with the U.S. side at all levels, he said.

“We welcome more face-to-face communication with those in U.S. business, strategy and academic communities, including Mr Thornton, to enhance mutual understanding between the two countries,” said Wang. 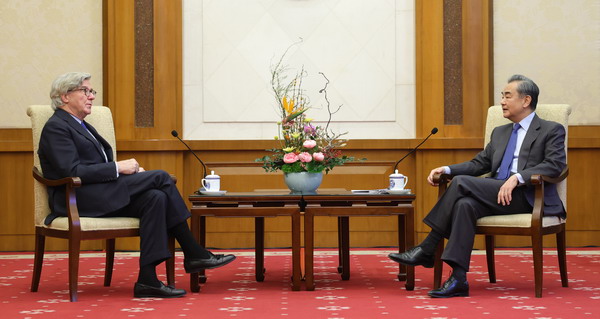 For his part, Thornton said the U.S. and China are supposed to be strategic partners who can work together.

“I am ready to continue to play a role in promoting U.S.-China economic and trade exchanges, enhancing the American public’s comprehensive understanding of China and promoting the stable development of U.S.-China relations,” he said.

During the meeting, Wang also urged the U.S. side to follow through on the consensus between the two heads of state when they met on Indonesia’s resort island of Bali last month.

The U.S. should see China as it is, stop unjustified containment and suppression and return to a positive and pragmatic policy toward China, he said.